There is an urgent need to reduce levels of air pollution globally. Although air quality measures have had positive results at some locations in the world, millions of people in both developing and developed countries die prematurely every year because of long-term exposure to air pollutants. The health of many more is seriously affected.

Sources of air pollution include traffic (especially diesel vehicles), industrial sectors (from brick making to oil and gas production), power plants, cooking and heating with solid fuels (e.g. coal, wood, crop waste), forest fires and open burning of municipal waste and agricultural residues. Particulate matter 2.5 micrometres or less in diameter (PM2.5) is produced by incomplete combustion of fossil fuels and biomass and one of the biggest concerns. One-hundredth the thickness of a human hair, PM2.5 can penetrate deep into the lungs and blood stream and is dangerous at any concentration. The International Agency for Research on Cancer (IARC) concluded in 2013 that particulate matter is carcinogenic to humans. Ground-level ozone (O3) is another important air pollutant, which damages human health and crops. Reducing emissions of PM2.5 and ground-level ozone not only has an immediate effect on air quality, but also mitigates near-term climate change and helps achieve food security.

Over 3.5 million people die each year from outdoor air pollution. Between 2005 and 2010, the death rate rose by 4% worldwide, by 5% in China and by 12% in India. In Europe, exposure to air pollution from road transport costs about US$137 billion per year and harm caused by air pollution from the 10,000 largest polluting facilities in 2009 – including through lost lives, poor health and crop damage – was about US$140-230 billion.

Improving air quality has the potential to provide enormous economic benefits. In the United States, the direct economic benefits of reducing PM2.5 and ground-level ozone pollution under the 1990 Clean Air Act Amendments are estimated to be up to 90 times the cost of implementing them. About 85% of the economic benefits would be due to fewer premature deaths linked to reducing PM2.5 in the outdoor environment, with the early deaths of 230,000 people avoided in the year 2020 alone.

Air Pollution: the leading cause of environmentally related deaths

About 3 billion people in the world cook and heat their homes with coal and biomass. Air pollutant emissions need to be reduced not only from these inefficient energy systems, but also from agricultural waste incineration, forest fires and charcoal production. In Africa, due to the rapid growth of its cities and megacities, a large increase in air pollutant emissions from burning of fossil fuels and traditional biomass use for energy services is expected in the near future.

They could contribute 50% of global emissions in 2030, according to some estimates. A World Bank study found that in Sub-Saharan Africa implementation of low-sulphur fuels (50 ppm) and cleaning up of vehicles, including motorcycles, would result in health benefits estimated at US$43 billion over a ten-year period. 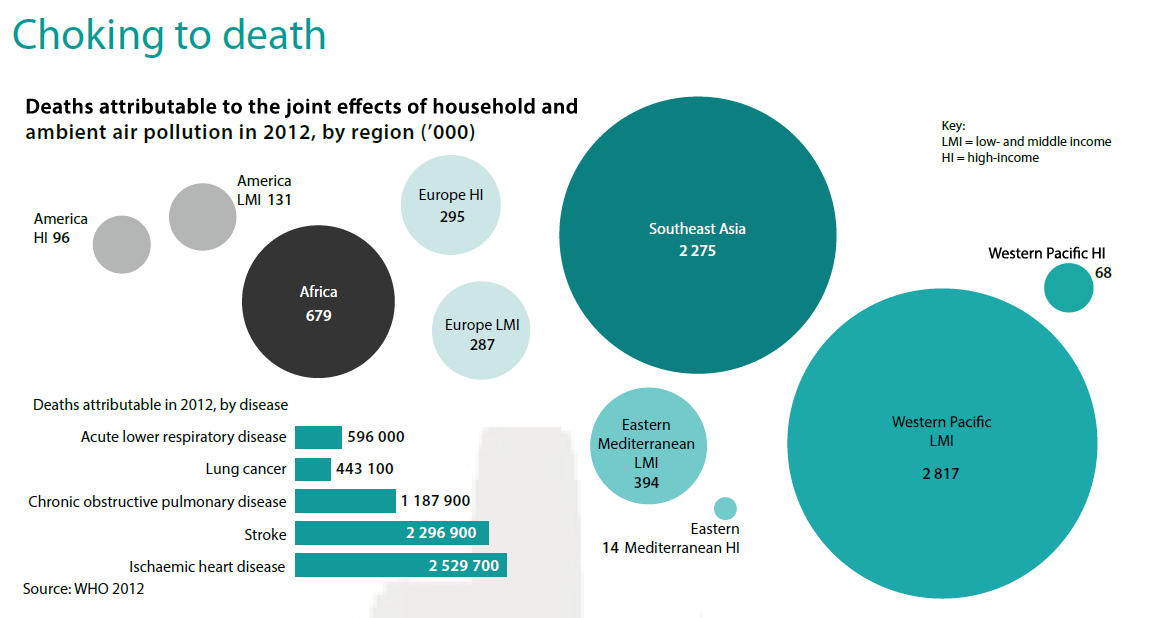 Effective policies and strategies to reduce air pollution work. In many countries, emissions and concentrations of harmful pollutants such as carbon monoxide (CO), sulphur dioxide (SO2) and lead are lower than a few decades ago. Africa has made good progress in introducing cleaner fuels with the phase-out of leaded petrol. Swiss studies confirm the substantial health benefits of air quality improvements, even in a country with relatively low levels of air pollution.

Many efforts to reduce air pollution go hand in hand with technological enhancements that also improve energy efficiency, thereby producing additional economic and environmental benefits. Although technology is available to make vehicles, agriculture, industrial installations, power plants, waste treatment facilities and other sources less polluting, innovations and their adoption may take time. Moreover, progress in emission reductions per unit can often be outweighed by rapid increases in the number of units (e.g. vehicles).

Air pollution in developed countries has decreased in recent years, partly due to tighter emission controls, including on vehicles. Nevertheless, evidence suggests that road transport accounted for 50% of the cost of the health impacts of air pollution – both death and illness – in OECD countries in 2010 (or close to US$1 trillion). With the rapid growth of traffic in developing countries such as China and India, air pollution has outpaced the adoption of tighter vehicle emission standards. There is insufficient evidence to estimate the share of road transport in total health impacts due to air pollution in developing countries.

The transboundary challenge of air pollution

Investing in implementing effective policies to make air cleaner will cost countries far less in the long run than allowing air pollution to worsen. Air pollution is a transboundary issue, and lessons can be learned from past successes in any country. In many cases technological improvements to reduce air pollution can pay for themselves as additional benefits such as energy efficiency are realized.

The Global Fuel Economy Initiative is working to improve the fuel economy capacity of the global vehicle fleet. Successful international cooperation to phase out leaded petrol under the UNEP-led Partnership for Clean Fuel and Vehicles (PCFV) – and more recent actions to reduce PM2.5 emissions and promote a shift to low-sulphur fuels – suggest that the global fleet is becoming less polluting. When the PCFV was launched in 2002, approximately half the world’s countries used leaded petrol. As of October 2013, only six countries were still using a small amount. The PCFV phase-out avoids an estimated 1.3 million premature deaths per year.

Countries are curbing air pollution by enforcing air quality standards and stimulating the development of cleaner technologies. Target-setting to improve air quality should be based on the latest science – including the best possible estimates of impacts of air pollution on the health of people and ecosystems. Scientists and policy-makers worldwide have ready access to internationally agreed guidelines such as the World Health Organization (WHO) air quality guidelines, the Environmental Health Criteria documents and International Agency for Research on Cancer (IARC) studies. 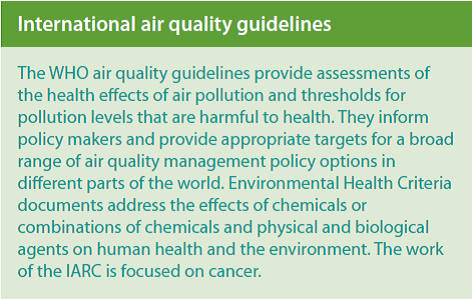 Some countries are more advanced than others in regard to establishing limit and target values as well as requirements to reduce emissions from pollutant sources, monitor emissions and concentrations, and determine exposures. Countries lacking experience can profit from the knowledge already acquired by more advanced ones, keeping in mind local and regional differences including climatic conditions, income levels and consumption patterns.

It has long been recognized that air pollutants are easily transported across borders. Over 50 countries are engaged in effective cooperative work under the United Nations Economic Commission for Europe (UNECE) Convention on Long-range Transboundary Air Pollution. Existing cooperation between government agencies and other bodies at national and regional levels through networks and other mechanisms can be further expanded. Air quality assessments would help identify gaps in countries’ capacity to address air pollution and identify new opportunities for cooperation.

Data collection and sharing is of fundamental importance in addressing air quality issues and measuring policy effectiveness. Despite some progress, air quality data are often scattered or incomplete and not easily available.

Emissions of outdoor air pollution from major sources can be reduced through policies and investments that support less polluting and more energy-efficient transport, housing and industries, as well as improved power generation, municipal waste management and agricultural practices. Actions that reduce air pollution can also reduce climate impacts. Black carbon, for example, is one of three short-lived climate pollutants targeted for reduction by the CCAC along with methane (CH4) and hydrofluorocarbons (HFCs). It has been estimated that ‘fast action’ on black carbon and methane would potentially cut the rate of climate change in half for the next several decades, as well as reducing air pollution-related deaths by as much as 2.4 million per year and avoiding annual crop losses of 50 to more than 100 million tones. Opportunities clearly exist to tackle air pollution and other severe health and environmental problems cost-effectively using integrated approaches.